Rome, it is often said, is just one big museum or archaeological site. The task of choosing what attractions to visit can overwhelm before you even step foot in the city. And the number of different lists of must see places often does not help making a choice any easier. With my suggestions, I add a twist to some of the more popular sights for those visitors to the ‘eternal city’ who want to do more than just tick off a list of attractions.

The most iconic sight in Rome. The Colosseum is at the top of most people’s list of places to visit in Rome. And with good reason. You have to really dislike archaeology and/or the ancient Romans not to want to see it for yourself.

There are a number opportunities for guided tours of the Colosseum, during the day or the evening – a night-time tour is definitely on my bucket list. However you choose to visit, take some time to go behind the Colosseum (from the entrance) and see the remains of the Ludus Magnus, now below street level and partially excavated. Here you will see about half of what was the practice arena and the barracks of the gladiators that performed in the Colosseum. In the buildings above the unexposed part, there is an excellent coffee shop – much less crowded as most visitors to the Colosseum skip this side.

Throwing a few coins into the pool of the Trevi Fountain is said to ensure a return to Rome. Whether you do want to return or not, the slightly over-the-top fountain is a popular spot to have your photograph taken. And a picturesque one it is, day or night.

The wonderful sculptures that make up the fountain act out the Taming of the Waters. Behind the Baroque fountain, figuratively and literally, is a Roman story, remains of which can still be seen today. Bas reliefs on the Palazzo Poli illustrate these origins. 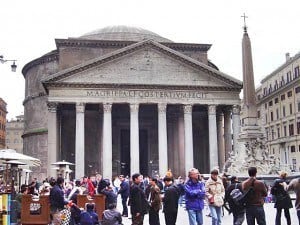 Completed in 125 AD by Emperor Hadrian, the Pantheon has stood for 1889 years. Until 1958 the temple’s domed roof had the largest concrete span in the World. Initially a temple, to all Roman gods, the reason it has stood the test of time is because it was converted into a church, as well as the quality of its construction.

As it is free to enter, and as there are many great cafés around the square, this is a popular and wonderful spot to sit and soak up the atmosphere on a sunny day. At the centre of the square in front of the Pantheon is a Baroque fountain. The centrepiece of that fountain is an obelisk – and Egyptian obelisk dedicated to Ramses II. Just behind the Pantheon on the Piazza della Minerva is another Egyptian obelisk.